We have stated in some of our other articles that the temperature of your cellar is very important to the success of your beer dispense, basically what you get out of the tap in the bar is dependent on what you put into the cellar, and the cooling system is a major player in drinks dispense quality.

Why Do I need Cellar Cooling?

If your beer is not stored at the correct temperature then many issues can occur which will cause you to either serve a poor standard beverage to a customer or increase the wastage, both of these will be costing you money.

If Cask Beer is stored at a temperature above 13ºC then it will spoil.  This is because the yeast needed to secondary ferment the beer during the conditioning process will metabolise the sugars far too quickly causing sour, vinegar tasting and very bitter flavours.  It will also reduce the shelf life of the beer, in the same way that leaving food un-refrigerated in a kitchen will cause it to spoil and can be a hotbed of harmful bacteria growth.

In Keg Beer it can cause an increase in Fobbing, making it harder to pour and causing excessive wastage which all has to come off your bottom line.

At the opposite end of the spectrum a cellar that is too cold will also cause you issues.  In the case of Cask beers cold temperatures can in-activate the yeast slowing the 2nd fermentation process down, which is  required to finish off or condition the beer before service. This means that it can take longer to get the correct flavours to develop, if at all, meaning that you can get an increase in customer complaints and very poor flavour from your beer.

In both Cask and Keg Beer it can also cause a chill haze to form which ruins the clarity and appearance of the beer as well as cause Fobbing.  In this instance it is because the CO2 within the beer has become trapped (lower temperature stop CO2 from bubbling out of the beer to maintain a proper head), and once it hits the warmer air of the bar the CO2 reacts in an aggressive manner causing the beer to overflow from the glass. Think of the times you may have put a can of beer or a bottle of pop in the freezer to cool it faster and then forgotten about it, once opened and the defrosting process has started the liquid will explode in a sea of foam, wasting most of the drink and causing any that remains to be flat and lifeless. 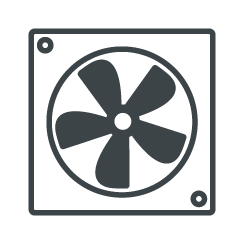 How Does A Cellar Cooler Work?

The Cooling System and Fan or Fans:

The cooling system (also know as an Evaporator) works in the opposite way to a radiator in your house or in your car, rather than hot water circulating through the system a chilled liquid is circulated through thin metal pipes. The external air is pulled into one side of a membrane by a fan, the membrane captures the latent heat in the air and passes cooler air out of the other side.  Each unit is fitted with an air temperature sensor which will turn the air cooler on and off depending on the ambient temperature of the air passing through the chiller system. The fans run continuously regardless of the temperature and circulate the air to help prevent hot and cold spots within the cellar environment, an internal compressor and chiller unit that holds the cooling medium regulates the air temperature.

The condensing unit is very similar to the Evaporating unit but works in reverse,  as heat is transferred into the cooler liquid it is pumped through pipes to the condensing unit which is normally on a wall on the outside of the pub, here air from outside the pub is blown by fans over the cooling pipes transferring the latent heat trapped in the air from the cellar to the outside world before the liquid is once again pumped back down to the cellar ready to cool the air again.  These units work in conjunction with the thermostat in the cellar and will automatically turn off when not needed, although in this instance both the condensing unit and the fan will switch off to save power.

How To Get The Best Out Of Your Cellar Cooler